skip to main | skip to sidebar

THE RISE AND FALL OF THE MOVEMENT ANNA HAZARE’S MOVEMENT LOSING STEAM? WHAT NEXT? 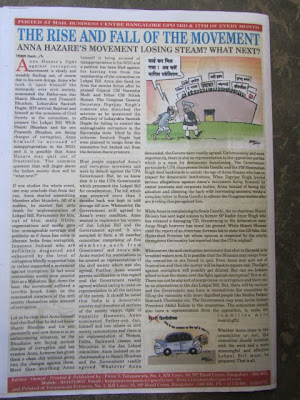 
THE RISE AND FALL OF THE MOVEMENT

Anna Hazare’s fight against corruption movement is slowly and steadily fizzling out, of course due to his own doings. Anna who took it upon himself the monopoly over civil society, nominated the Father-son duo Shanti Bhushan and Prasanth Bhushan, Lokayukta Santosh Hegde, RTI activist Kejrival and himself as the nominees of Civil Society to the committee, to prepare the Lokpal Bill. While Shanti Bhushan and his son Prasanth Bhushan are facing charges of corruption, Anna himself is accused of misappropriation in his NGO, and it is possible that Anna Hazare may quit out of frustration. The common question that will linger above the Indian society then will be “what next?”

If one studies the whole event, one may conclude that from day one, Anna started committing blunders after blunders. All of a sudden, he started fast unto death for implementation of Lokpal Bill. Fortunately for him, out of blue, many NGOs, organizations and media gave him unimaginable coverage and publicity as if Anna has come to liberate India from corruption. Innocent Indians who are definitely disgusted and exhausted by the level of corruption blindly supported him or rather supported a movement against corruption. In fact some overzealous media even painted him as a Mahatma. But, down the lane, the movement suffered a terrible break down as the nominated members of the civil society themselves were accused of corruption.

Let us be clear that Anna himself had clarified that he did not know Shanti Bhushan and his son personally and now Anna is in an embarrassing situation, as the Bhushans are facing serious charges of corruption and tax evasion. Anna, however has given them a clean chit without going into the charges against them. More than anything Anna himself is being accused of misappropriation in his NGO and a petition has been filed against for barring him from the membership of the committee on Lokpal Bill. Anna also faced ire from the secular forces after he praised Gujarat CM Narendra Modi and Bihar CM Nitish Kumar. The Congress General Secretary Digvijay Singh’s coments also disturbed the activists as he questioned the efficiency of Lokayukta Santosh Hegde for failing to control the unimaginable corruption in the Karnataka state. Irked by this criticism Santosh Hegde had even planned to resign from the committee but backed out from the decision due to pressure.

Most people supported Anna’s anti corruption movement and were by default against the UPA Government. But, let us know that it is the UPA Government which processed the Lokpal Bill for consideration. The bill which was prepared more than 3 decades back was kept in cold storage till now. Whatsoever, the Government still agreed to Anna’s every condition. Anna wanted to implement his version of Jan Lokpal Bill and the Government agreed. It also accepted to form a 10 member committee comprising of five members each from Government’ and Anna’s side. Anna wanted his nominations to be treated as representatives of the civil society which was also agreed. Further, Anna wanted gazette notification in this regard and the Government readily agreed without caring to insist on representation to all the sections of the society. It should be noted that India is a democratic country and therefore all sections of the society enjoys right of equality. However, Anna nominated Father-son duo, himself and two others as civil society nominations and there is no representation of Women, Dalits, Backward classes and Minorities in the Jan Lokpal committee. Anna insisted on co-chairmanship to Shanti Bhushan and the Government readily agreed. Whatever Anna demanded, the Government readily agreed. Unfortunately and most importantly, there is also no representation to the opposition parties which is a must for democratic functioning. The Government particularly UPA chairperson Sonia Gandhi and the PM Manmohan Singh bent backwards to satisfy the ego of Anna Hazare who has no respect for democratic institutions. When Digvijay Singh leveled serious allegations against Anna’s movement being financed by vested interests and corporate bodies, Anna instead of facing the situation and silencing the barb with convincing answers, wrote a complain letter to Sonia Gandhi to silence the Congress leaders who are leveling charges against him.

While Anna is complaining to Sonia Gandhi, the co-chairman Shanti Bhusan has sent legal notices to former SP leader Amar Singh who has released a damaging CD, threatening to file defamation case. Amar Singh however has stood his ground. While Shanti Bhusan cited the report of an American forensic lab to state the CD fake, the Hyderabad Forensic lab whose opinion is respected by the courts throughout the country has reported that the CD is original!

Whatsoever, the anti corruption movement that shot to the peak is in troubled waters now. It is possible that the Bhusans may resign from the committee or are forced to quit. Even Anna may quit out of frustration and then the matter will be back to square one. The fight against corruption will possibly get diluted. But can we Indians afford to lose the steam over the fight against corruption? Not at all. There can not be any sort of compromise on corruption and there can be no alternatives to the Jan Lokpal Bill. But, there will be vacuum and the Government may have to reconstitute the committee by filling the vacancies with more dignified people like Medha Patkar, Somnath Chatterjee etc. The Government may even invite former President Abdul Kalam to the committee. The committee should also have a representation from the opposition, to make the committee more meaningful.

Whether Anna stays in the committee or not, the committee should continue with the work and a more meaningful and effective Lokpal Bill must be prepared. That is all.
Posted by FIROZ.T.TOTANAWALA at 6:13 AM

Labels: THE RISE AND FALL OF THE MOVEMENT ANNA HAZARE’S MOVEMENT LOSING STEAM? WHAT NEXT?

FIROZ.T.TOTANAWALA
INVESTIGATIVE JOURNALIST I write because I cannot bite its the way the weak one's fight.